He joined the Indian Foreign Service in 1974. Early in his career, he was posted in a number of West Asian countries such as Kuwait, Iraq and Yemen and later, between 1987-90, he was Consul General in Jeddah. He also held positions in the Indian missions in New York, London and Pretoria. He served as Indian Ambassador to Saudi Arabia twice, Oman, and the UAE. He currently holds the Ram Sathe Chair for International Studies at Symbiosis International University. 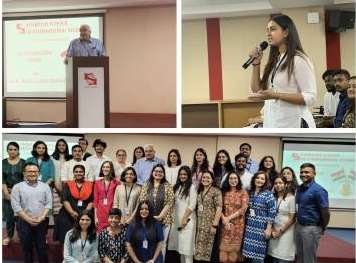 On April 22nd, 2022, the Career Advancement Cell, under the aegis of the Symbiosis School of International Studies, conducted an interactive Career Counselling Session. Amb. (Retd.) Talmiz Ahmad addressed the students and their concerns regarding the Civil Services Examinations and motivated them.

He emphasized on the importance of discipline and consistency. He encouraged the students by dispelling their inhibitions about the exam, sharing personal anecdotes and experiences. Additionally, he reminded the students how the institute’s curriculum would be beneficial in their preparation. He shared tips on how a diplomat’s life would and should be like, reinstating the mantra to not give up and nail it in the first attempt itself.

The session was followed by a QnA session where students voiced some more of their doubts and concerns. This was the Career Advancement Cell’s first offline session, conducted in hybrid mode.