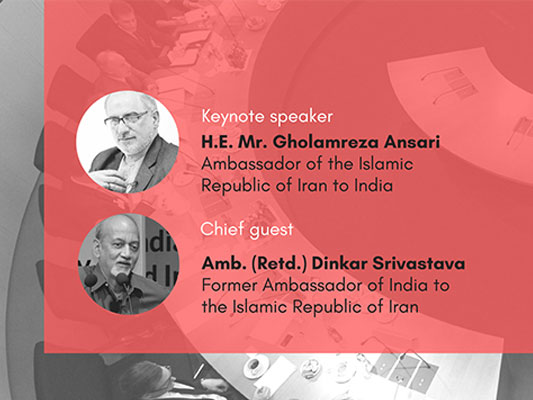 India and Iran have always shared deep social, cultural, economic and political connections and relations that have enriched both civilisations. The use of the Persian language at the Mughal courts is just one example of Iranian cultural influence in north India. In the 21st century bilateral relations also remained extremely cordial during Iran's years of global chastisement for its nuclear program.

New Delhi's contemporary cooperation with Tehran is mainly premised on India's energy security and access to Afghanistan and, Central Asia. New Delhi's desire to reclaim for India the influence and cultural relations it once enjoyed with the countries of Central Asia before the dawn of colonialism can only be reasonably realised through Iran. India and Iran also share many similarities: Extra-regional ambitions and a strong sense that they pursuing an independent foreign policy are common traits in the diplomatic behaviour of both countries.

The landmark nuclear deal between Iran and P5+1 has started a new era of Asian geopolitics. This has implications for India, which is tied to Iran strategically. In fact, since the lifting of nuclear related sanctions on Iran, India has managed to actually secure a major economic deal with the Islamic Republic. Indian Prime Minister Narendra Modi signed 12 agreements, including a deal to develop Chabahar - a port city on the Gulf of Oman - shortly after he paid an official visit to Iran in late May 2016.

Today, West Asia is passing through a phase of geopolitical churning. In this context, major changes in global, regional, and even internal West Asian politics call for a new interpretation of the strategic importance of the West Asia to India and vice versa.

Besides that the emergence of radical and extremist tendencies in West Asia are affecting regional and global stability. India and Iran share a crucial stake in peace and stability and that both share common concerns relating to radicalism and terrorism. During PM Modi's last visit to Tehran, both countries have also agreed to consult 'closely and regularly' on combating the threats of radicalism and terrorism. To curb extremist thoughts and hardcore philosophies, both countries have great potentials and civilisational forces stemming from their ancient inclusive and pluralistic cultures.

In this context, Symbiosis School of International Studies (SSIS) proposes to conduct a Round Table discussion on:
'India and Iran: Partners in R​egional ​S​tability'.​

The key aspects to be covered during the RT will be as under :